Lasizwe wants SA to go back to Level 5 Lockdown

South African men where is your self-respect – Ntsiki Mazwai

Why Katlego Maboe failed to appear in court

#DinneratSomizi won’t be dropped despite claims Somizi stole the idea

Police have confiscated liqour up to the value of R1 million

Close to 10 000 inmates have been granted parole by the Department of Correctional Services since President Cyril Ramaphosa authorised the release on parole of certain categories of low-risk inmates to curb the rapid spread of Covid-19 in correctional facilities.

The latest statistics provided by the department showed that 107 (prisoners and officials) had died as a result of the virus. In May, as the country battled a spiralling Covid-19 infection rate, Ramaphosa gave the department the green light to grant parole to qualifying low-risk offenders who were under correctional supervision to continue to serve their sentences in the system of Community Corrections.

“From the projected qualifying inmates, 84.17% have been considered for parole placement; 52% have been released on parole and 32% have been given further profiles.

“Since the special parole dispensation does not remit sentences, these offenders were placed out subject to placement conditions which must be complied with until they serve their sentences in full,” Maistry said.
He said that the country’s Correctional Services centres currently had an inmate population of approximately 138 070, which had resulted in overcrowding of 14.12%.

“The reduction of overcrowding in order to improve social distancing is one of the approaches the Department took as advised by the United Nations.

’’Placement and releases of qualifying low-risk offenders commenced on 20 May 2020, following administrative procedures and normal parole processes being undertaken before placement commenced.

“Parole Boards and head of Correctional Centres (HCCs) had to consider each case on its own merits prior to placement of these qualifying offenders on parole.

’’This requires a meticulous process, which involves victim-offender mediation and the taking of DNA samples by the South African Police Service,” Maistray said.

Next Mr Handsome who destroyed Boity is breathing fire

President Ramaphosa says COVID-19 is far from over, warns of rising infections in EC 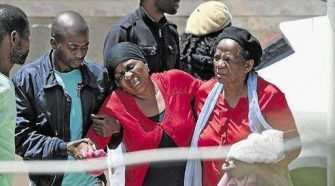